While at work the other day we were trying to decide on some place to go for lunch, because of course where you are going for lunch is something you discuss instead of actually working.  We wanted something different from our normal go to places; not that they aren’t good, they just get a little old after awhile.  So while searching that very popular review site that rhymes with help for places near my address I found Weiss Deli & Bakery.  This deli is located in a strip mall on the corner of Green Valley Parkway and Sunset, near Trader Joes.  Honestly I have been over here and have never noticed this place before.  We got there around 11:30 am and there were two other parties seated so we had our choice of seats; at first this made me weary because it is always weird to eat in a place that is empty.  A waitress at the end of the restaurant waved us to the back to take a seat in her section; because this is a seat yourself kind of place.  Even though I had been a bit skeptical with the lack of patrons that all shortly changed through our lunch as every booth and table except for the one behind us began to fill up as it got closer to noon.

They did have a wide range of deli favorites from corn beef sandwiches to matzo ball soup; this soup was very popular I would say because I saw about 5 bowls travel past our table to the ones around us.  I decided to go with something I have never had before which was called “Ceily’s Stack”. 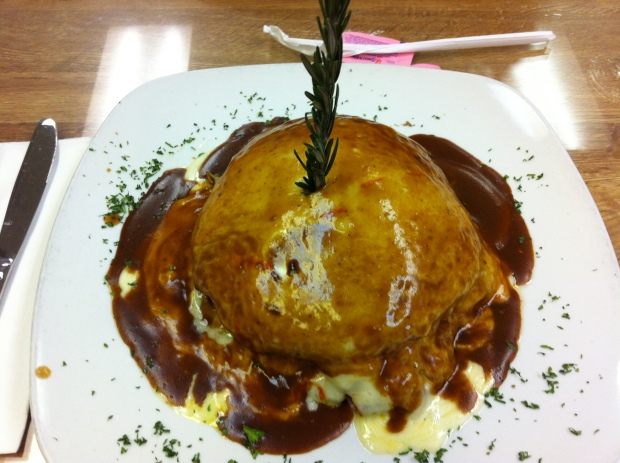 The Ceily’s Stack is two potato latkes stuffed with braised brisket topped with Muenster & Provolone cheeses and then drizzled with brown gravy sauce and sour cream.  I have to admit that I was pleasantly surprised on how good this actually was.  I mean it certainly isn’t the prettiest thing to look at but everything worked really well together.  The braised brisket was really the shining star, it was perfectly tender and juicy with a great beef flavor.  I would come and just have brisket and the brown sauce if it is on the menu.  The brown gravy sauce was exactly what you would expect from a good brown gravy it had great beef flavor and it really worked well on this dish.  They put a good amount of cheese on this dish which as a cheese lover is fabulous and it was melted perfectly.  Now the description says that this dish comes with sour cream which I did not receive and I do think that this would have added something to the dish, because after a few bites it needed either more gravy or something else to dip each bite into, and sour cream has that tangy bite already and if it was paired with the brisket and latkes it would have added another layer of flavor.  Now I am not sure if I am just not a potato latke person; because I have never had them before, but to me they were a little too soft and flavorless.  To me they got lost in each bite, I think I would have liked them more if they were a bit crunchy to give this dish some texture.  Towards the end of the dish I just pushed the latkes to the side and ate the brisket, cheese & gravy.  I would say that if you want something different and are a fan of the latke then give this one a shot, just be sure to ask for extra gravy.

Next up was the Veggie Melt: 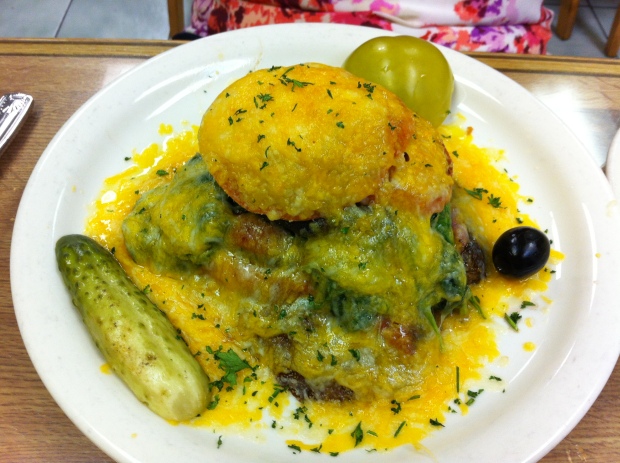 The veggie melt is served open faced or closed and is a roasted portabello mushroom, sauteed spinach, roasted peppers, tomato, caramelized onions and cheddar-jack cheese on top of grilled rye bread, this also came with a choice of fries, cold slaw, potato salad or fresh fruit.  My mother ordered it with the side of fruit and received two wedges of cantaloupe, a strawberry and two orange slices.  This was a lot better than most sides of fruits where you get a couple cubes of melon and some grapes.  I had a couple bites of this sandwich and it was also really good, granted at first look it looks like it was put in the oven just a little too long to melt the cheese, but it worked out.  Again they were not shy with the cheese so for the cheese lover this is a good place to eat.  The veggies were cooked well and the portabello was nice and meaty, not over roasted so it still maintained all the goodness of a protabello.  But for me I really enjoyed the spinach it wasn’t over cooked and melded really well with the flavors of of the rye bread, then you got the creamy texture of melted cheese.

As you can see the portions are surely on the large side, and what is shown above is nothing compared to some of the items I saw go past our table.  The sandwiches are piled high with meat, definitely not for the faint of heart.  I know that I will be back to try other things on the menu because the food was worth it.  I do think the service was ok, not really slow or fast either.  My soda was only refilled once and that was at the end of the meal while my mother’s ice tea was filled up a few times throughout lunch.  But in all honestly this is what I kind of expect when I go to a diner/deli the home town feel where they run on a different time than everything else around.  Our waitress was chatting with all her tables, a few of which I think might be regulars, which is a good sign, because obviously they are doing something right when they have regulars they actually recognize.  On the decor side of things it isn’t the nicest place, it is in an older building and it shows.  On the walls are artwork that if I am not mistaken were for sale by local artists, I take this as a nod to the art supply store right next door.  I do think in some way the fact that it isn’t all gussied up is what makes it feel like a true deli, something you would find on the corner in New York or Jersey a place that locals flock to because they know that the food and people are what it is truly all about.

What I am Tweeting!

Topic of Your Choosing…

A Look Into the Past…

What I Am Talking About…